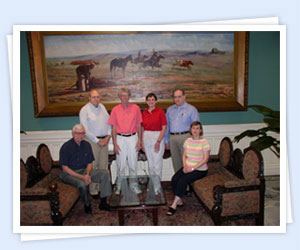 Gamma Sigma Delta began as a professional agricultural fraternity called Delta Theta Sigma at the Ohio State University, December 1, 1905, and maintained a chapter house. Other chapters were installed at Iowa State (1907), Pennsylvania State College (1908), University of Missouri (1908), Oregon State College (1909), and Utah State College (1909), but all of these chapters adhered to an honorary plan and did not have chapter houses. In 1913 Delta Theta Sigma at The Ohio State University, withdrew, maintained the name, and its chapter house. The name of the remaining organization was changed to Gamma Sigma Delta and followed the honorary plan of operation.

Later (1928) a chapter of Gamma Sigma Delta was installed at Ohio State. In 1915, the Honor Society of Agriculture was formed at the University of Minnesota. A movement was started early in 1916 to merge the two organizations, Gamma Sigma Delta and Honor Society of Agriculture. A joint committee from both organizations met at the University of Minnesota, June 3, 1916, and reached tentative agreement on the merger. A new constitution was drafted and ratified early in 1917.

The Honor Society of Agriculture, Gamma Sigma Delta, became the official name. From 1917, Gamma Sigma Delta has been strictly honorary. It became faculty governed and selected membership from juniors, seniors, graduate students, alumni, and faculty. Currently 50 chapters have been installed at universities throughout the United States, Puerto Rico, the Philippines, and Honduras.

Since 1917 the Society has been strictly honorary in character. Elections to membership are conducted by the faculty members of a chapter. At the option of the local chapter, juniors in the upper 5 percent of their class may be initiated. Senior students must be within the upper 15 percent of their class and must show promise of future leadership in some phase of agriculture or a related area and must have demonstrated exceptional investigational ability. Graduate students of outstanding ability in the aforementioned areas (gpa of >3.5/A=4.0) are eligible for membership. To be eligible faculty members must have demonstrated exceptional teaching, investigational ability, or service for a period of at least three years. Alumni are eligible for election no sooner than five years after graduation by virtue of significant service in one or more of the aforementioned areas.

With the goal of building a strong core membership capable of growing and sustaining a young chapter, the Davis chapter has inducted faculty, staff, alumni, post docs, and industry related individuals and senior students with a high level of research activity.

A single honorary membership per chapter per year is reserved for a person who has furthered agriculture and does not qualify for membership in any other category.

Dues are established by each local chapter. Dues for membership in the Davis Chapter of Gamma Sigma Delta is $20.00 per year.

Membership is for life. An individual may affiliate with the nearest/most convenient chapter after graduating or changing positions.

Relation to other Honor Societies

Occasionally faculty at qualified institutions do not believe they need a chapter of Gamma Sigma Delta because their university already has a chapter of Alpha Zeta, Phi Kappa Phi, and/or Sigma Xi. However, these organizations are different.

Phi Kappa Phi selects members from juniors, seniors, graduate students, and faculty from all the schools or division of the university. Election is based on scholarship.

Sigma Xi is faculty run but recognizes research. It also cuts across all areas of science. It does not initiate undergraduates.

The broad objective of Gamma Sigma Delta is to encourage advancement and improvement in all branches of the agricultural sciences and agricultural industry.